From ancient times until early days

During the Bronze Age (3000-1200 BC) the powerful Cycladic, Minoan and Mycenaean maritime civilisations flourished. According to Homer, this was a time of violence and wars based on trade rivalries, although it is thought that Minoan culture was generally peaceful and harmonious. By the 11th century BC the Minoan and Mycenaean cultures had collapsed, due to changing patterns of trade and a Dorian invasion from the north, and a ‘dark age’ ensued. By 800 BC Greece was undergoing a cultural and military revival, with the evolution of city-states, the most powerful of which were Athens and Sparta. Greater Greece was created, with southern Italy as an important component. Read More

OLYMPIA AND THE OLYMPIC GAMES

Olympia is the mother of the Olympic Games. The ancient Greeks had chosen the most peaceful and picturesque landscape, 2 hours away from the present town of Pyrgos. The Olympic Games and The Amfiktionies were the mostimportant celebrations of all the Greeks. In the plain of Olympia there is one of the most sacred places in the ancient times, the grove of Olympia, that was called Altis. In the enclosure of Altis were built temples and other majestic buildings.

When the games were starting, the wars had stopped and the people of all around Greece were gathering to view the spectacle sight. The victory of an athlete was the victory of the town he was from. The right of participation to the games had only the free Greek citizens, so it had been forbidden to the slavesto participate to the games.. Read More 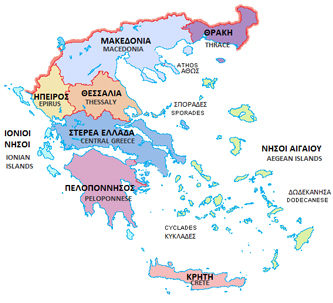